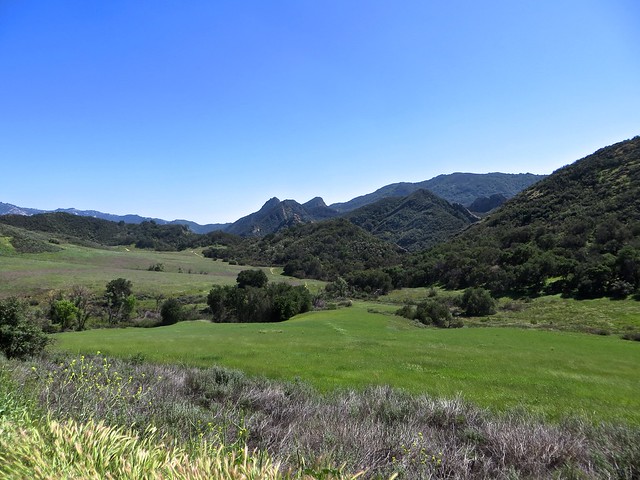 I don't think I've ever seen the Santa Monica mountains get this green. 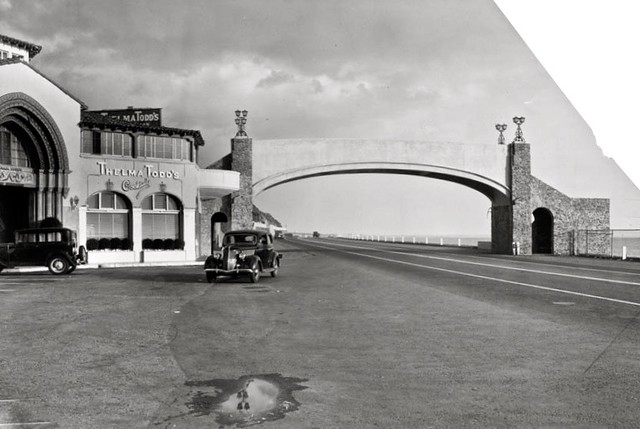 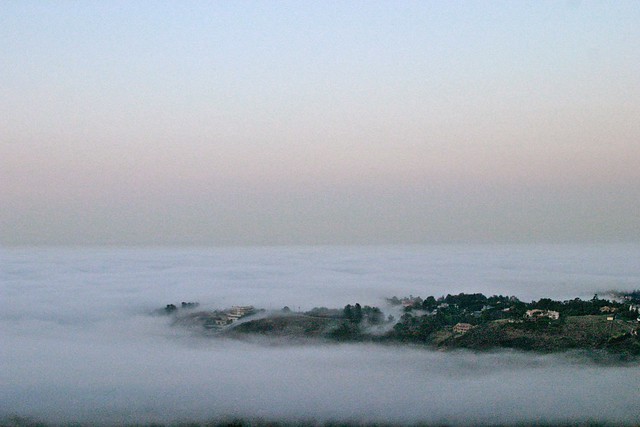 Almost daily fog that fall. Sometimes it burned off, sometimes not quite. But most days, if you timed it right, headed out before morning sunlight loosened things up, you could get up above and find the coast all wrapped in clouds. 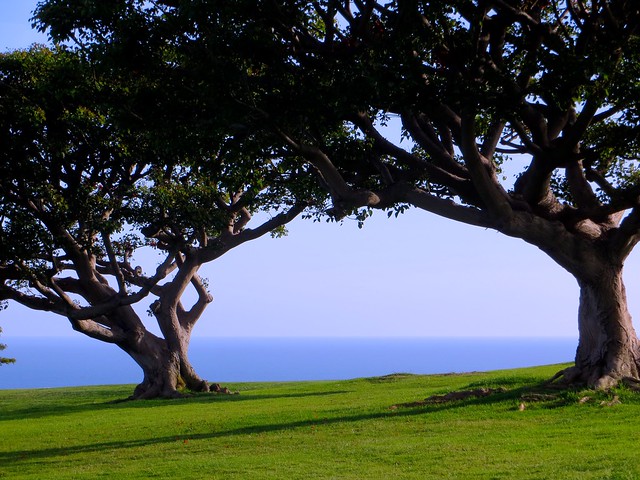 A day of not posting became two and then three and suddenly, a week's hiatus. To be honest, it has been a challenging few months. The deaths of two of my dearest friends, a first-ever encounter with (seriously, there has to be a better name for something so hellish) stomach flu, and news that the Tiny Labrador may be gravely ill with liver disease.

Add in that Casa de LOUD! is located in industrial Malibu, where coyotes on one's doorstep are not a thing, and the fact that the little point-and-shoot needs to be replaced, but parsing reviews of the newest cameras takes more mental bandwidth than is presently available, and voila -- radio silence.

Just now, though, while sifting through photos for a friend, there were so many nice ones in the archives that I'm thinking I'll alternate past and present shots so I can keep posting. After six (!) years of weighing in every day it feels too weird when the blog goes dark.

For today, here's a shot me and my late friend Jamie, my first true love. (It's a photo of a snapshot and not that great.) We met when I was 18 and he was a sophisticated older man of 22. When our romance eased to an end, we stayed best friends. This is a holiday dinner at his family's beautiful farm on the banks of the Mississippi River in Burlington, Iowa.

I remember one year his older sister, Anna, had a boyfriend who got a summer job on a river boat. Every evening, as it motored upstream back to dock, the captain would blow the horn as they passed the farm. Anna would run upstairs to the river porch, a wonderful screened-in space to sleep on hot August nights. She would wave a kerchief at her boyfriend, and he would stand on deck and wave back. It all seemed so romantic. 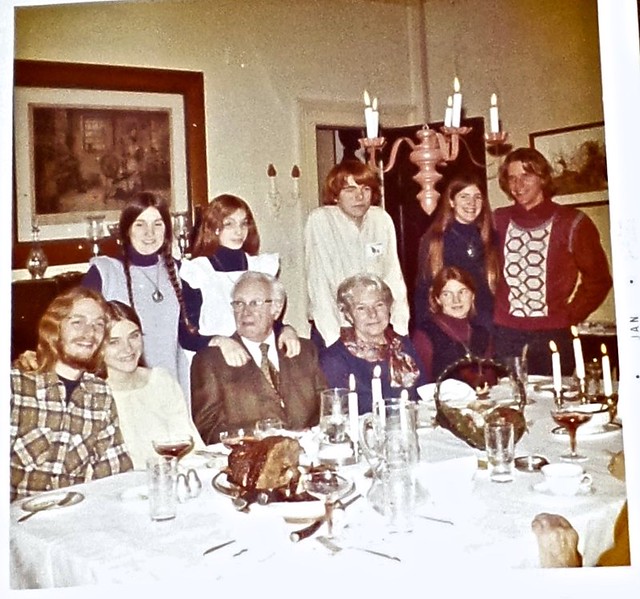 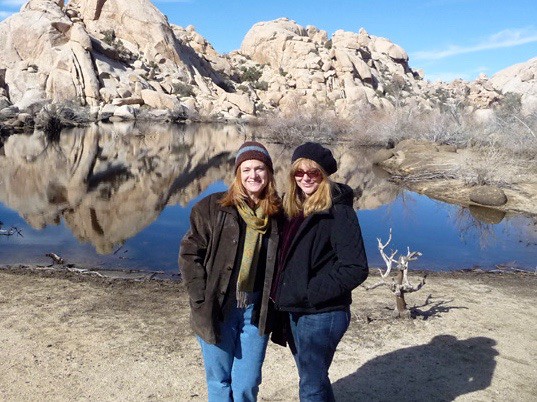 As for Miss Muffinhead, no news yet from the vet about lab results. (Or Lab results, considering her breed.) But of course I'll let you know what we hear. 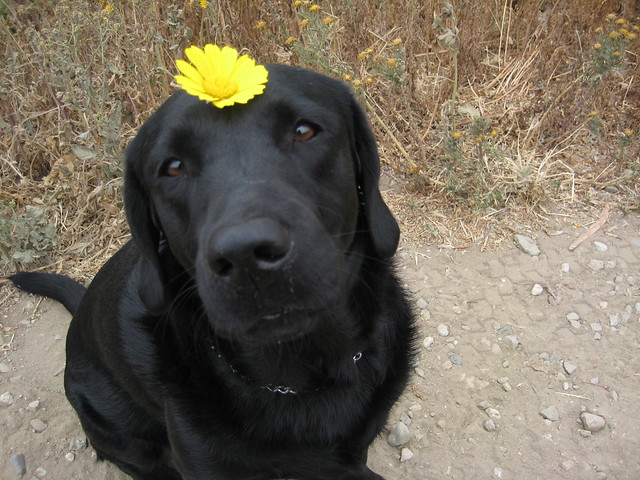 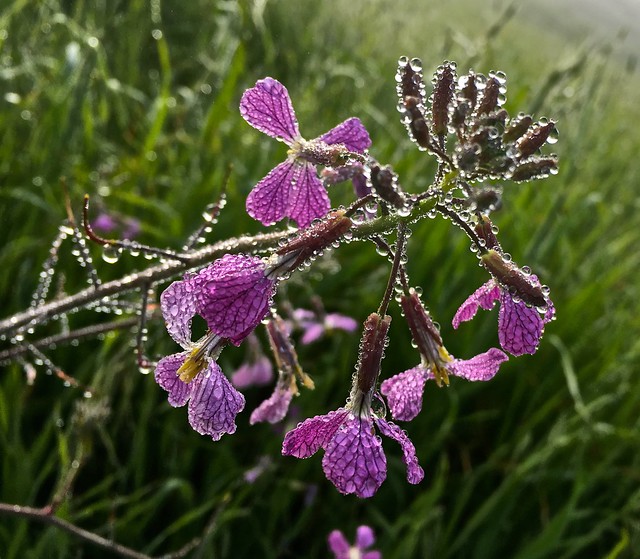 Wildflowers -- this is penstemon, yes? -- enjoying our ongoing fog event.

Seriously, the Bu plate genre appears to be endless. 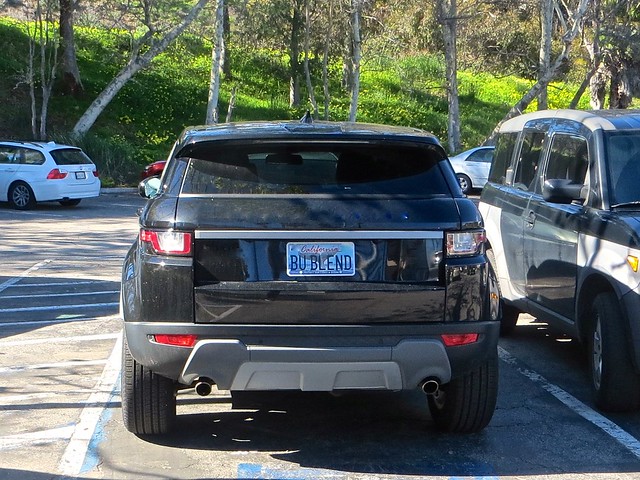 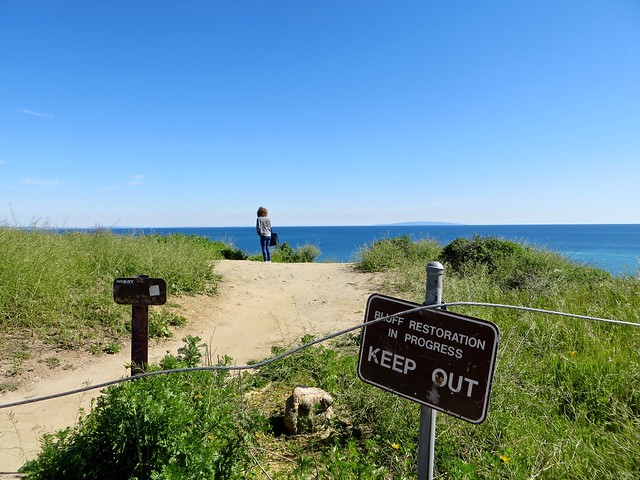 Really, what other choice is there but to ignore the sign, climb over the barrier and trample the delicate bluff that's undergoing restoration?

The flying Miss Muffinhead over the years: 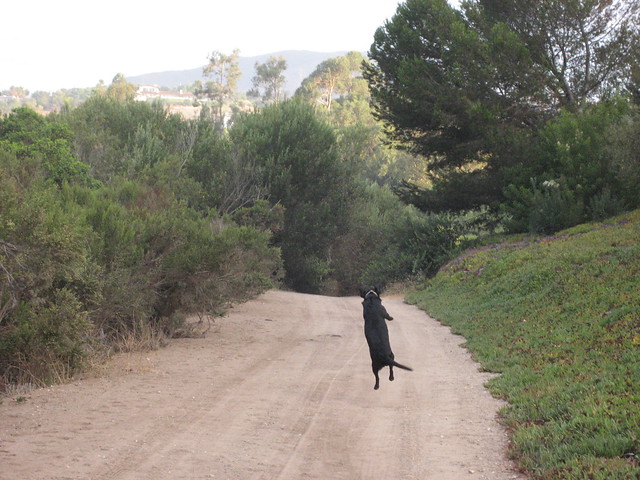 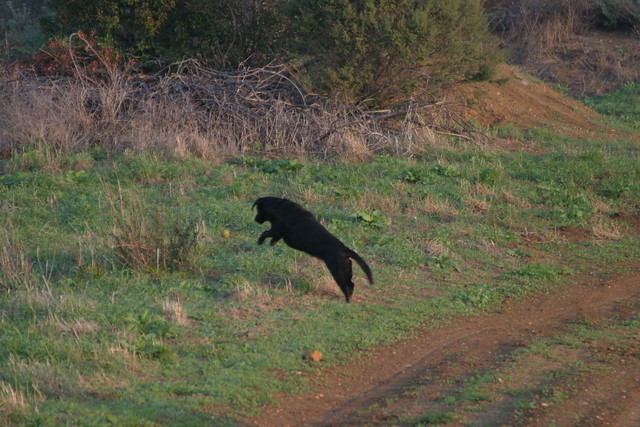 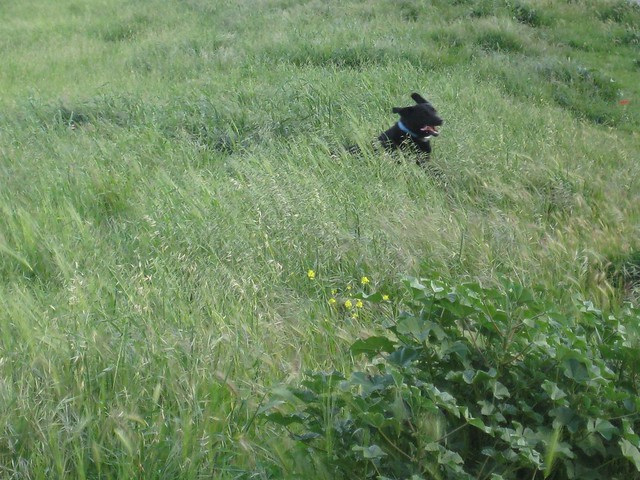 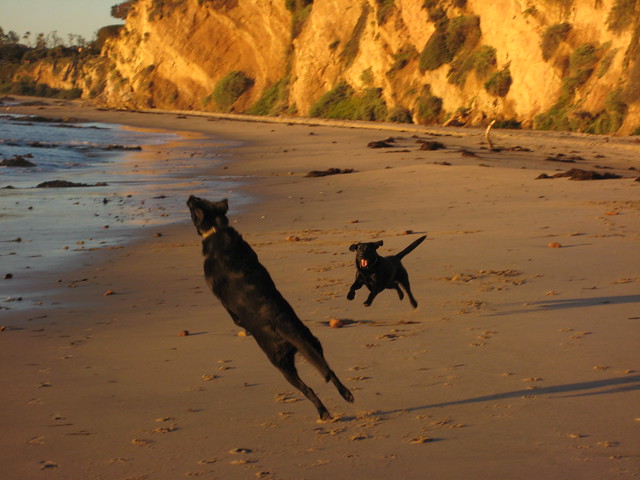 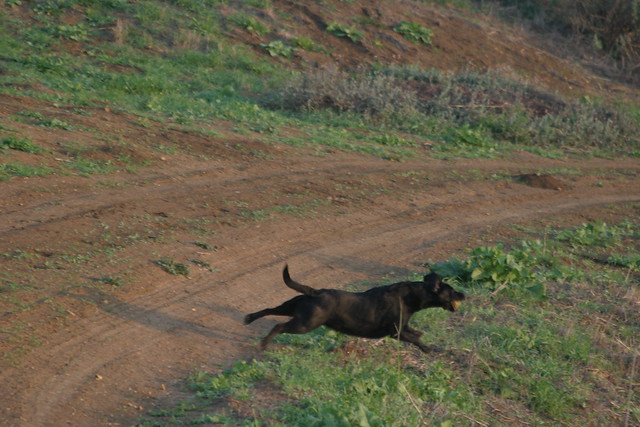 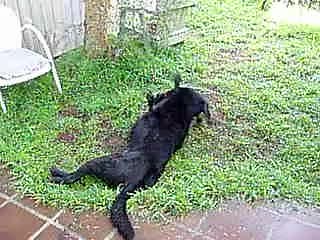 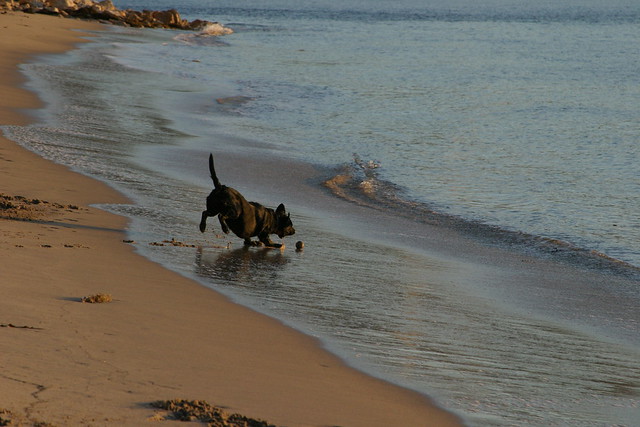 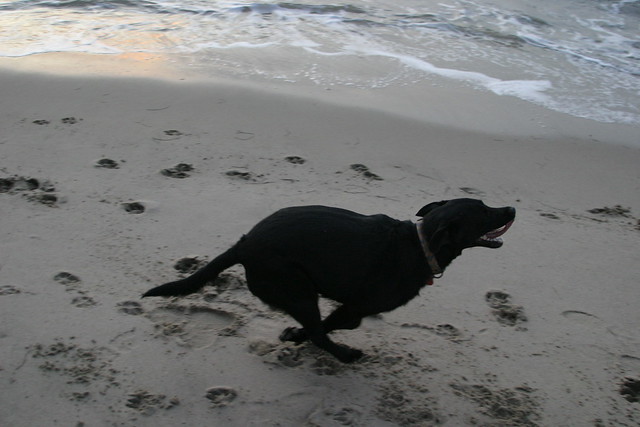 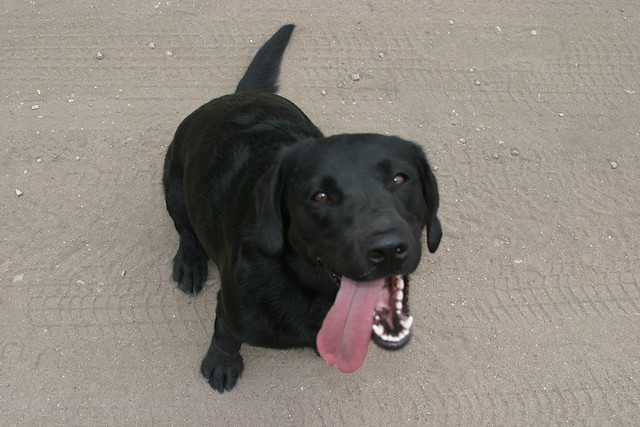 Five days in a row of coastal fog in May or June and we've got gray and gloom to describe it. But March? Uncharted foggy territory. 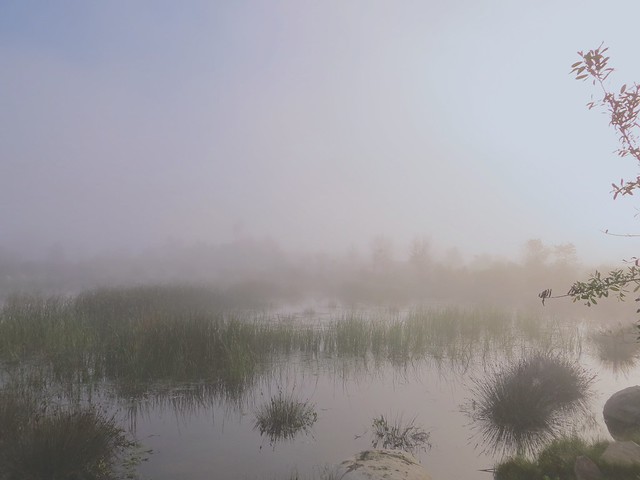 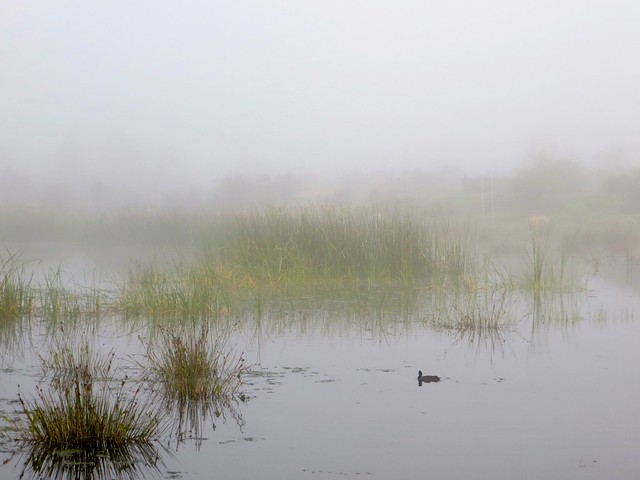 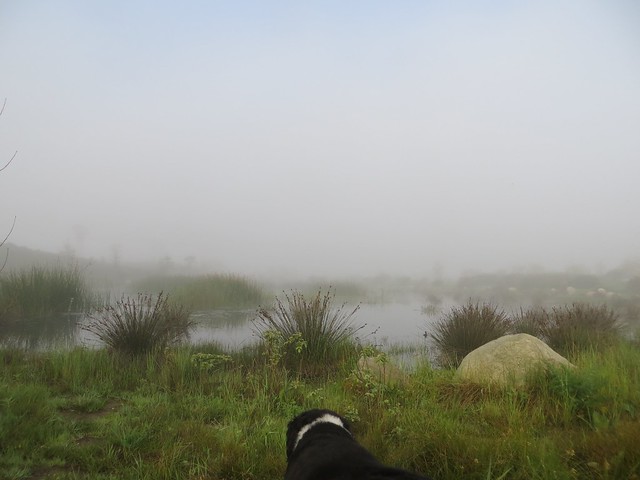 (This is Legacy Park in Malibu, btw.)

Drifting fog, wild parrots and the traffic on PCH. 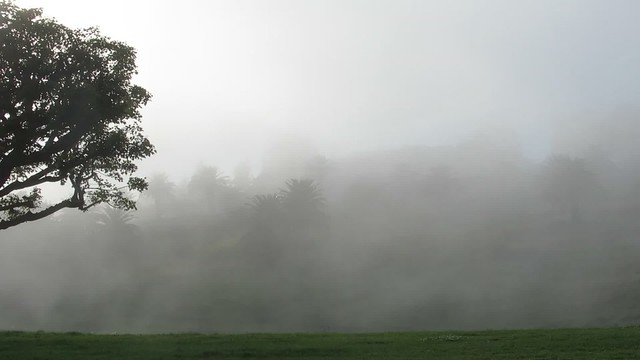 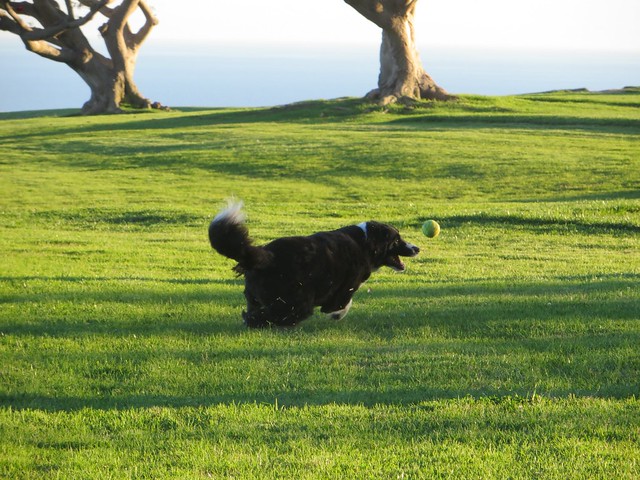 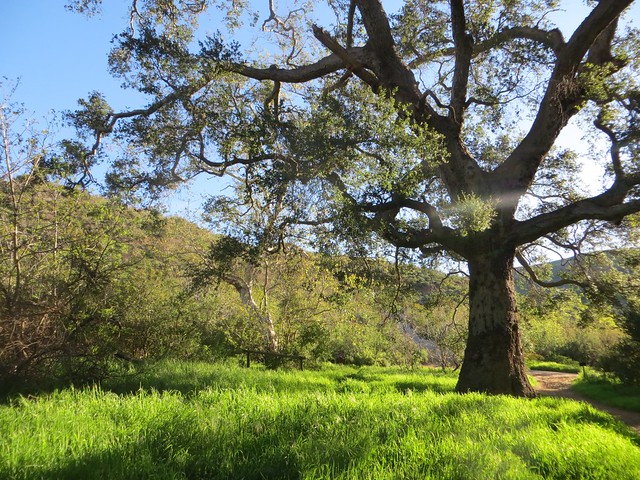 Can't quite work up a narrative for the broken bike and the lone bedroom slipper abandoned at Solstice Canyon last week. 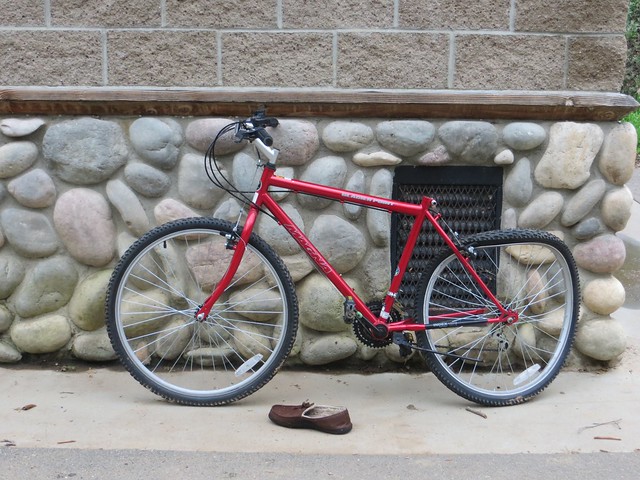 Peak bloom for the giant coreopsis at the Point Dume headlands
Veronique de Turenne  • March 1 2017 9:21 AM 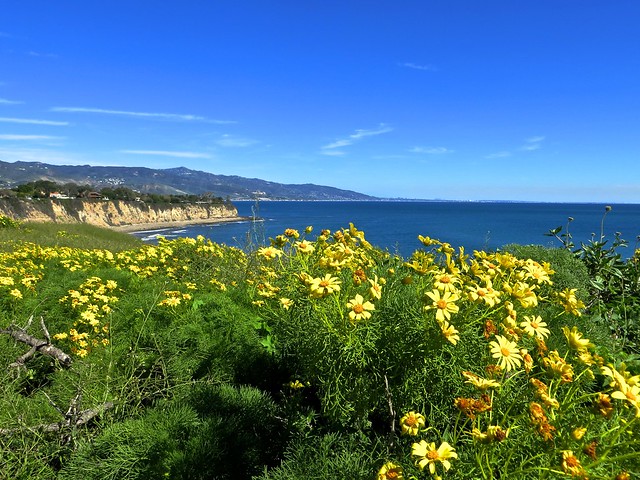 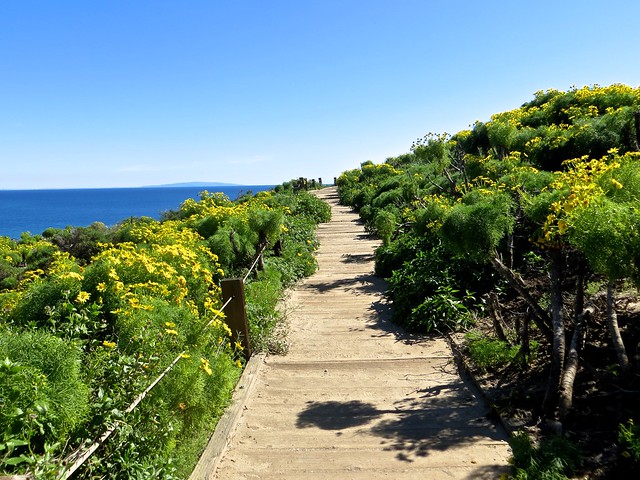 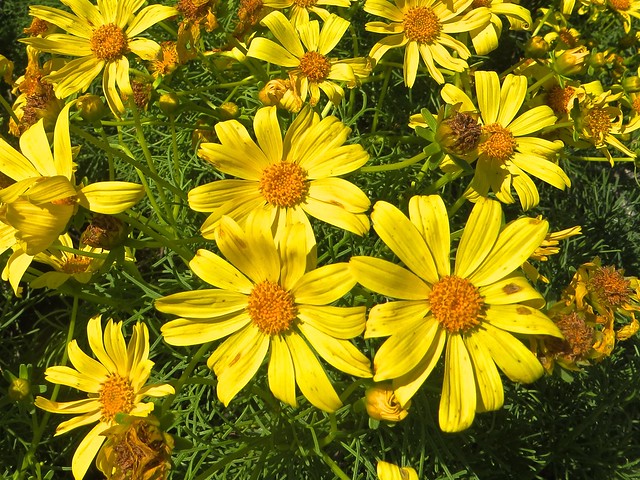 The giant coreopsis is blooming all over the coast but it's most spectacular at the Point Dume headlands. Fair warning -- there are only a handful of legal parking places. Tickets are steep and enforcement is often aggressive.

If you do go, please stay on the trails. And when you (inevitably) see others off-trail and damaging the fragile landscape, please consider speaking up. Help protect the headlands.