Sad news from the Malibu Pier

Big waves along the coast, and big trouble -- a surfer died at the Malibu Pier.

Not much info yet about the surfer, who news reports say was discovered unconscious in the water late this morning. From KTLA, which has the most information right now:

The distress call in the 23000 block of West Pacific Coast Highway (map) came in at about 11:20 a.m., according to Inspector Rick Flores of the Los Angeles County Fire Department.

The man, who was in the water and unconscious when rescuers got to him, had been surfing near the Malibu Pier, according to Capt. Eric Howell of the Fire Department's Lifeguard Division.

Though lifeguards got the man to shore and paramedics took him to a hospital, he never revived.

The pier itself has suffered structural damage, according to The Malibu Times. Big waves loosened a piling and California State Park officials have shut down most of the pier for most of the week. Details here.

Surf is supposed to be even bigger tomorrow and lifeguards are asking people to please stay the hell out of the water.

Meanwhile, here's the surf near Little Dume this afternoon: 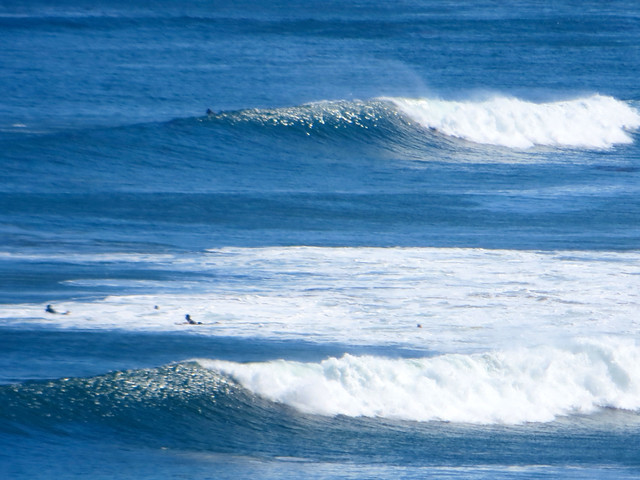 Previous story: Monday dogs
Next story: Big Wednesday
LA Observed front page | Media | Politics | Business | Arts | Place
New at LA Observed
'The Present'...and the fuzzy future of L.A. theater
The sea is dying, the art lives
The Santa Monica Mountains after (I'm sorry -- what??) the rain
Hello again
Family time
It's Puppy Wednesday!
They grow up so fast
We went back to Bluffs Park today
Happy Mother's Day!
I really miss the beach
Follow us on Twitter
On the Media Page