PCH is closed in both directions in Malibu*

*Update: PCH partially re-opened at about 3 p.m., according to Malibu Patch. Traffic still as hellish as you would imagine on a warm weekend afternoon. 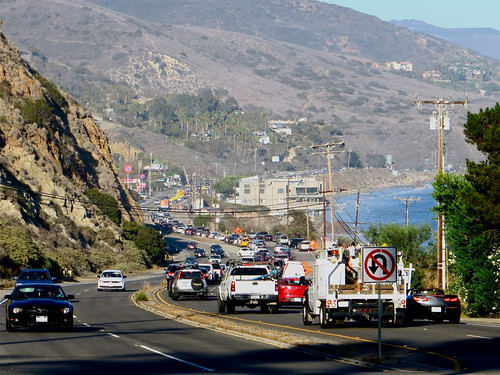 Expect gridlock if you're headed to the beach here today thanks to a power pole near Latigo Canyon Road that keeled over for no apparent reason. PCH has been closed in both directions since 8 a.m. and will stay that way for either four hours or all day, depending on who you're listening to.

Traffic in Malibu reached an absolute standstill today, as a power pole cracked and began to fall over on Pacific Coast Highway at Latigo Beach.

The pole simply failed, there was no crash or other apparent outside factor, said a sheriff's deputy at the Malibu/Lost Hills Sheriff's Station. The road closure was ordered just after 8 a.m. today.

The closest detour around the four-mile closure was a mountainous 30-mile-loop via Malibu Canyon Road, Mulholland Highway, Sierra Creek Road and Kanan-Dume Road.

For the intrepid driver, here's the alternate route:

Previous story: Signs of Saturday: Lab dance
Next story: 9/11 memorial opens at Pepperdine in Malibu
LA Observed front page | Media | Politics | Business | Arts | Place
New at LA Observed
'The Present'...and the fuzzy future of L.A. theater
The sea is dying, the art lives
The Santa Monica Mountains after (I'm sorry -- what??) the rain
Hello again
Family time
It's Puppy Wednesday!
They grow up so fast
We went back to Bluffs Park today
Happy Mother's Day!
I really miss the beach
Follow us on Twitter
On the Media Page