So the sign I really want to post isn't a reality yet but the news of its impending arrival is being greeted with cheers -- the LA City Council voted unanimously to rename a part of Elysian Park Avenue for our very own Vin Scully.

ECHO PARK -- The City Council voted unanimously today to rename Elysian Park Avenue in honor of Vin Scully as the legendary broadcaster prepares for what he says will most likely be his last season offering play-by-play of Dodger games after 66 years.

The council motion that was approved 12-0 directs the Bureau of Engineering to start the process of wiping Elysian Park Avenue off the map after more than a century and replacing it with Vin Scully Avenue. The two-block street runs between Sunset Boulevard and Stadium Way near one of the ballpark's main entrances.

And if you think that means I'm re-posting a photo of me and Vin taken the time I got to interview him in his studio booth before a game at Dodger Stadium, well, you know my methods, Watson.

He was as fascinating and classy and generous and kind as you would imagine. 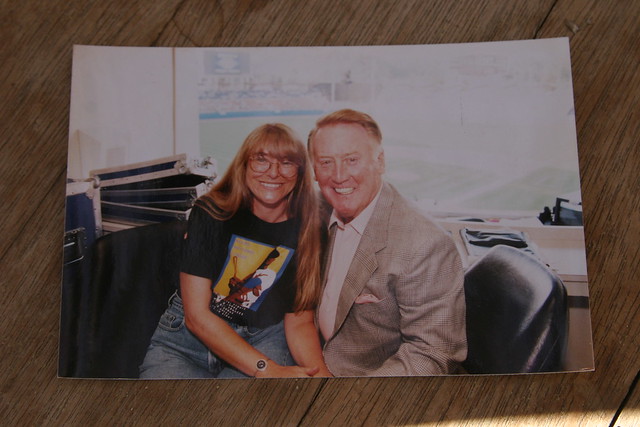 Previous story: Driveby
Next story: Way out west
LA Observed front page | Media | Politics | Business | Arts | Place
New at LA Observed
Testing testing
Another owl in another oak
Another shot of that handsome owl
Two minutes with a great horned owl
IT RAINED!
Happy birthday Teddy!
Yes, still here. Yes, still struggling in the spooky silence of a shuttered LAO
The marine layer these days
Vista
An update from the world's worst blogger
Follow us on Twitter
On the Media Page