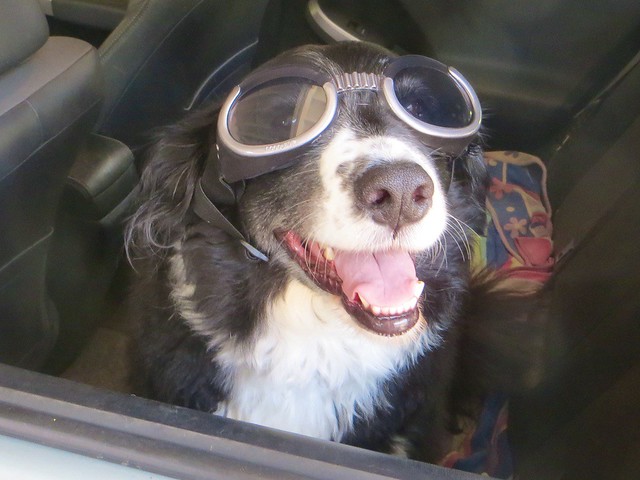 The handsome border collie loves to stick his head out of the window when we're driving and after several different people talked up the idea of dog goggles -- yes, they're referred to as 'doggles', and yes, it's hard to bring yourself to say that out loud -- I finally ordered a pair.

Because he's incredibly polite, Walt sat still as we fiddled around and figured out the fit. And because it's also kind of absurd, he put up with a lot of laughing. BUT the joke turns out to be on the humans in his life. On our first drive he stuck his head out of the window and you could just see the light bulb go off. No dry eyes!

After that first trip, when the goggles came off, they were covered in grit and (dead bugs) goo. All in all, as with his raincoat, a very good investment. Also apparently entertaining to fellow drivers, who point and laugh and take his picture.

Next entry: Legacy Park again
More by Veronique de Turenne:
The noonday sun
The 9/11 memorial memorial is on display at Pepperdine
In other news...
HELLO! We're back! And yes, this blog paused for a disturbingly long time. So sorry!
Legacy Park again

Previous story: tbt: Morning light
Next story: Legacy Park again
LA Observed front page | Media | Politics | Business | Arts | Place
New at LA Observed
'The Present'...and the fuzzy future of L.A. theater
The sea is dying, the art lives
The Santa Monica Mountains after (I'm sorry -- what??) the rain
Hello again
Family time
It's Puppy Wednesday!
They grow up so fast
We went back to Bluffs Park today
Happy Mother's Day!
I really miss the beach
Follow us on Twitter
On the Media Page