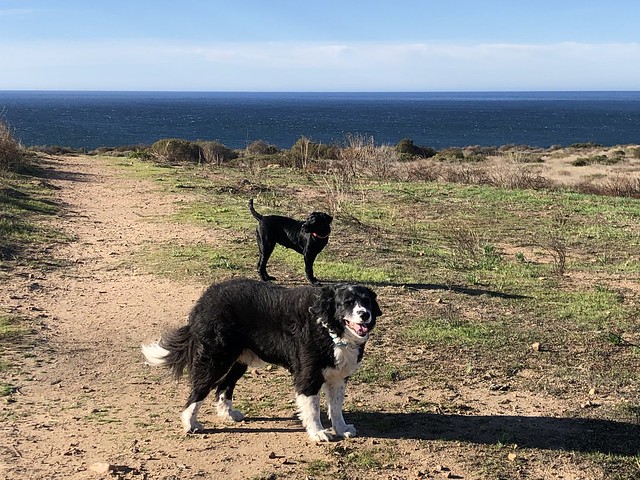 What happens is there's a wild puppy in the house so even the basics, like work or a shower or a trip to the mailbox, feel like epic victories. And yes, the camera is always in hand but the photos pile up and it turns out that decision fatigue is a real thing. By the time you've made the thousands of choices it takes to get a final draft of a writing assignment, talked Godzilla with the 10-year-old, debated fart sounds with the 8-year-old, and weighed which of the wild puppy's transgressions you're going to correct (bringing home a neighbor's sandal) and which you'll just laugh at (dashing around the lawn with a pair of underwear on her head) choosing photos is a bridge too far. All of which is a long, long way to say that good grief, a week has gone by and the photos are still in the camera and the puppy just lost two teeth and it feels like a miracle that this paragraph even got written, let alone makes sense. So here's a photo of the dogs at Bluffs Park where it kind of looks like Teddy is standing on Walt's back.

Previous story: Ducks!
Next story: Red-winged blackbirds at Legacy Park*
LA Observed front page | Media | Politics | Business | Arts | Place
New at LA Observed
'The Present'...and the fuzzy future of L.A. theater
The sea is dying, the art lives
The Santa Monica Mountains after (I'm sorry -- what??) the rain
Hello again
Family time
It's Puppy Wednesday!
They grow up so fast
We went back to Bluffs Park today
Happy Mother's Day!
I really miss the beach
Follow us on Twitter
On the Media Page