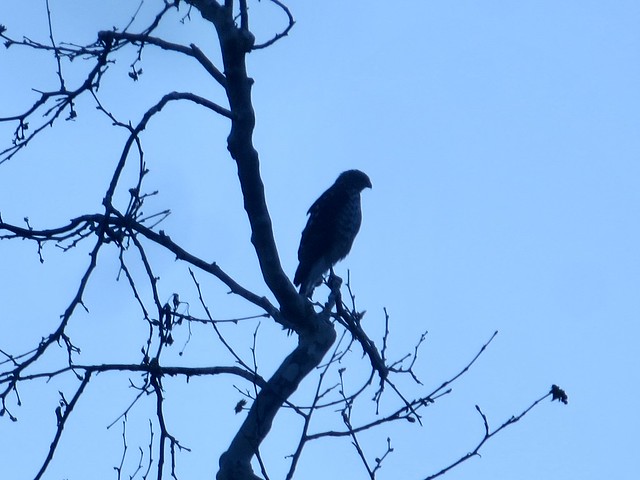 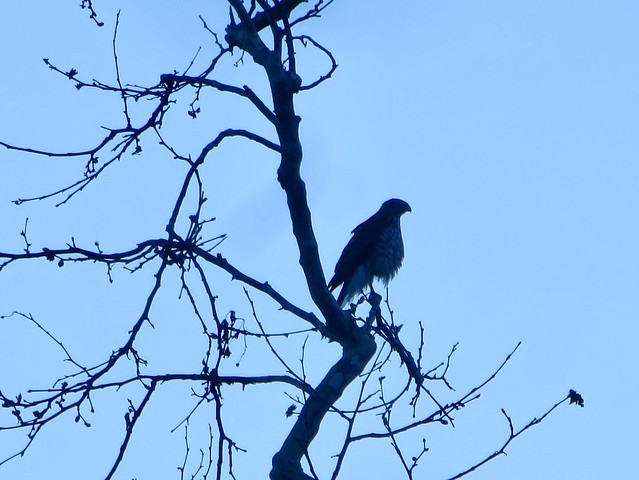 There's always a lot of chatter from the wild parrots, snippets of conversation when they're roosted in a tree, non-stop screeching when the flocks are in flight. So when the birds suddenly grew agitated the other day, using full sentences to communicate, it was time to take a closer look. And sure enough, there in an oak above the one where they were resting, this hawk. Nothing happened, just a staring match that led to more avian yelling until eventually the hawk moved on.

Next entry: Speaking of hawks
More by Veronique de Turenne:
It's Puppy Wednesday!
A gaggle of geese
They say it might rain this week
Teddy has graduated to the big-dog yard
Speaking of hawks

Previous story: Keeping track
Next story: Speaking of hawks
LA Observed front page | Media | Politics | Business | Arts | Place
New at LA Observed
Testing testing
Another owl in another oak
Another shot of that handsome owl
Two minutes with a great horned owl
IT RAINED!
Happy birthday Teddy!
Yes, still here. Yes, still struggling in the spooky silence of a shuttered LAO
The marine layer these days
Vista
An update from the world's worst blogger
Follow us on Twitter
On the Media Page