Saying goodbye to a friend in the driveway after sunset last week when the dogs raced up the hill behind the house to the deer (and bobcat and coyote) trail. They ran around a bit and then raced down, Walt first, followed by the Wild Puppy. They streaked past the humans, the puppy overtaking Walt in the process, and then BOOM, a sound like an explosion.

It's dark and hard to see. Walt reappears but there's no sign of Daisy so I walk to the rear courtyard and the big wooden gate has blown closed in a slight breeze. Except there's a hole in the middle where a board is missing, a Labrador-sized hole that, it turns out, was created by Daisy when she ran directly into and THROUGH the door and broke it open with her giant puppy head. Was she hurt? No. In fact, she was patiently waiting for us on the other side, eager for us to admire her handiwork and set her free. Which we did.

She's fine, no ill-effects, no trauma. (Can't say the same for her human.) In fact the Wild Puppy appears to have no memory of the event at all, although both she and Walt have quickly become connoisseurs of this new window on their world. 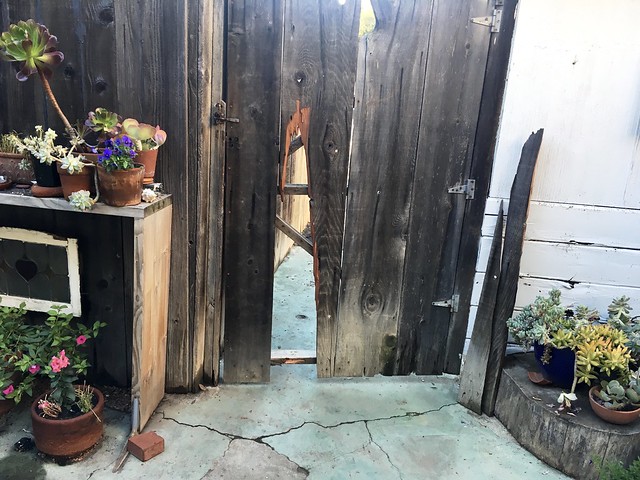 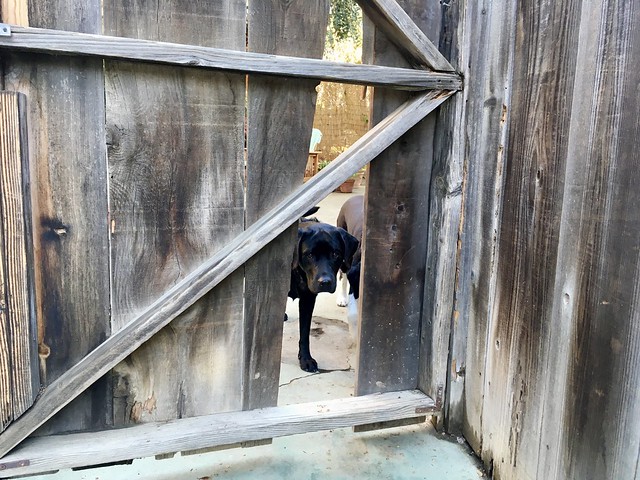 Previous story: What happened to the main house
Next story: What happened to Casa Mulholland
LA Observed front page | Media | Politics | Business | Arts | Place
New at LA Observed
'The Present'...and the fuzzy future of L.A. theater
The sea is dying, the art lives
The Santa Monica Mountains after (I'm sorry -- what??) the rain
Hello again
Family time
It's Puppy Wednesday!
They grow up so fast
We went back to Bluffs Park today
Happy Mother's Day!
I really miss the beach
Follow us on Twitter
On the Media Page