Are the trees of Southern California doomed? 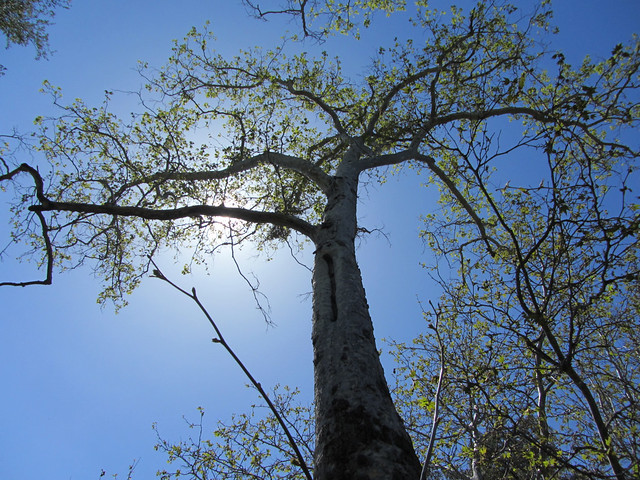 I generally expect to find the worst news of each day in the National sections of our valiant newspapers as Constitutional norms creak and strain under the non-stop assault from the junta in the White House, abetted by a near-dormant Congress that refuses to check or balance the escalating abuses.

This difficult story by Louis Sahagun in the LA Times about the swift and perhaps irreversible demise of the urban canopies of Southern California breaks your heart from an entirely new direction.

The trees that shade, cool and feed people from Ventura County to the Mexican border are dying so fast that within a few years it's possible the region will look, feel, sound and smell much less pleasant than it does now.

"We're witnessing a transition to a post-oasis landscape in Southern California," says Greg McPherson, a supervisory research forester with the U.S. Forest Service who has been studying what he and others call an unprecedented die-off of the trees greening Southern California's parks, campuses and yards.

Among the hardest-hit native species of urban trees are California sycamores, typically found along streams and commonly used as shade and street trees in places such as Griffith Park and along downtown's Wilshire Boulevard.

"Here's the sad news about sycamores," said Akif Eskalen, a plant pathologist at the University of California, Riverside. "If we cannot control the shot hole borer, it will kill all the sycamores in California. And when they're done with sycamores, they'll move to other trees."

Fair warning -- video on the page is annoyingly on auto-play.

Next entry: Little frog?
More by Veronique de Turenne:
Little frog?
Are the trees of Southern California doomed?
Do you mind if we spend a bit more time on Mulholland Highway?
Monday morning classic
What just happened?

Previous story: Do you mind if we spend a bit more time on Mulholland Highway?
Next story: Little frog?
LA Observed front page | Media | Politics | Business | Arts | Place
New at LA Observed
Testing testing
Another owl in another oak
Another shot of that handsome owl
Two minutes with a great horned owl
IT RAINED!
Happy birthday Teddy!
Yes, still here. Yes, still struggling in the spooky silence of a shuttered LAO
The marine layer these days
Vista
An update from the world's worst blogger
Follow us on Twitter
On the Media Page