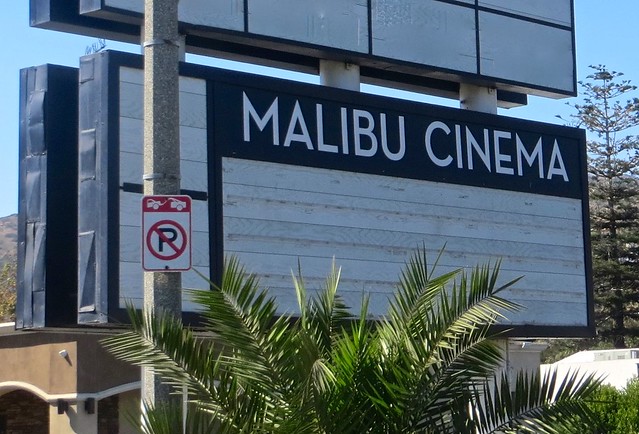 And just like that, the movie theater in Malibu is gone. It seems crazy that a city as well-off and well-connected as this one can't keep a cinema but reportedly Regal, the most recent exhibitor, wasn't able to make a go of it.

The 4,000-square-foot theater--tiny by today's multiplex standards--opened in 1972, first by the Wallace Theater Corporation. By 1992 the company was known as Hollywood Theaters. After a fire forced its closure in 2005, it reopened more than a year later and in 2011 Regal Cinemas took over its management.

Malibu resident Dick Guttman, a longtime film publicist, told The Malibu Times he was astounded by the theater's closing.

"It's incomprehensible in a town that basically was founded as a movie colony--originally a bunch of huts along the ocean that movie stars went to in the '30s to get away," Guttman said. "Malibu's always been not just a beach town. For it to abandon or be abandoned by theatrical distribution is just ridiculous."

Film lovers in Malibu who don't want to make the drive to the Agoura Hills or Thousand Oaks theaters have a good option in the Malibu Film Society, which screens an eclectic mix of features, documentaries and animation. During the annual Awards Screening Series, members get to see films from all Oscar categories, often with a Q&A with writers, directors and actors. (Yes, a MFS member is writing this paragraph. And yes, it's as good as it sounds.)

Previous story: Survivor
Next story: Rewind
LA Observed front page | Media | Politics | Business | Arts | Place
New at LA Observed
'The Present'...and the fuzzy future of L.A. theater
The sea is dying, the art lives
The Santa Monica Mountains after (I'm sorry -- what??) the rain
Hello again
Family time
It's Puppy Wednesday!
They grow up so fast
We went back to Bluffs Park today
Happy Mother's Day!
I really miss the beach
Follow us on Twitter
On the Media Page